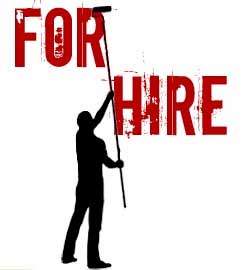 It hasn’t been long I joined men for hire but the experience is exhilarating, and I often wish I had joined a long time ago. In this industry, you are expected to provide companionship to women (and sometimes men) who are desperately in need of someone to talk.

Well, we are not an exception. Before I joined men for hire, I lived in a quiet block in the basement. The family had no use for the basement and decided to rent it out. It was damp and often dark, but since I couldn’t afford a luxury suite, I decided to go for it. When you don’t have money, you are usually confined to what you can afford rather than what you desire.

I did a couple of jobs; from watching the gate to cleaning public places. I worked more than twelve hours to raise enough money to pay my bills. Well, I am not saying this to elicit pity. Please, do not pity me. If I could work more hours, I would have done it not necessarily for the money but for something else.

My work hours were the best time I had to socialize with people. I felt alive from the companion I got from my co-workers. We often quarrel, exchange harsh words, but they all add up to making each particular day memorable. The moment I retire back to my rat-hole of a house in the evenings, depression sets. I am all by myself until the next day.

The first time I stumbled on the men for hire service while surfing with my smartphone, I was bewildered. For a moment, I almost imagined it was a new form of slavery or something similar to it. One of the men for hire agencies was recruiting, and the caption that followed cracked me up.

I was curious to know more. I did a little search and what I discovered spiked my interest. “I could give this a shot”, I told myself. But I was also sceptic about the requirements to become a member. After several considerations, I damned the odds and decided to go for it.

From the first moment I stepped into the interview hall, I discovered that this was far different from a regular job session. The ‘BOSSES’ were friendly and made huge jokes. The trickiest question that was asked was the motivation that makes you want to join the industry. For me it was simple; I was in need of companionship as well as a better pay.

They laughed about it, and I was left to imagine if I had blown it. A few days later, I  got a call that I was hired. It was a life-changing moment for me. It felt like doing what you love and being paid for it.

Each time I am hired by a lady to escort her to one event or the other, it avails me the opportunity also to explore the places I had wished to be but couldn’t because I couldn’t afford it. My boredom was cut down by more than half. When I was not with a client, I was with other guys at men for hire trying to acquire more knowledge about how things worked.

I was in a phase of my life where I could afford almost anything I wanted. Within six months, I moved out from the basement and got a better apartment in a busy neighbourhood. The new apartment was better because I had a large window beside my bed through which I observed the street when I was at home. The lights, the people moving up and down and the occasional ugly street dramas that played out made my time at home fun too.

For me, men for hire has revolutionized everything; from my earnings to my feelings. Those of us at men for hire offering the services are close-knit like a family. We call ourselves brothers and learn from each other.

However, it goes beyond us. Our utmost priority is to offer our clients the best of experience each time. With our services, we are changing the face of relationships. Women now understand that they have the right to be happy. They do not have to endure an abusive relationship just to make any guy happy.

There are times when a girl would want to hang out but because her boyfriend is not available to escort her or keep her company. We fill such void and help them to make the best of the moment. I haven’t had any course to regret deciding to be a part of men for hire. I love the family and will continue to get better at what I do.